An Overview of Merchant Promotions & Promotion Extensions in AdWords

The days are gone when Egyptian merchants back in the 11th century BC used papyrus to make sales messages and wall posters, but the practice of publicizing their wares using popular media still reigns supreme. With Google’s domination of the internet, therefore, it’s no surprise there are promotional deals especially aimed at online retailers. 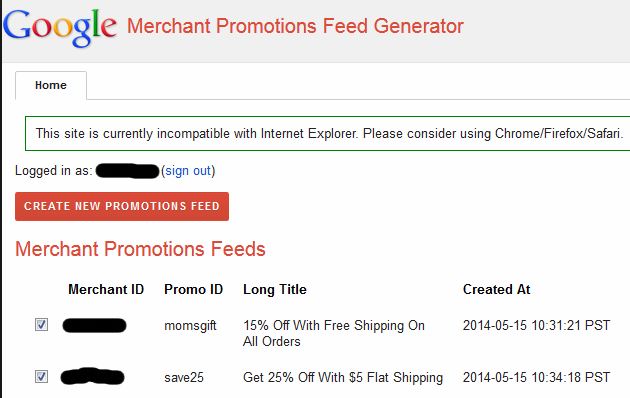 Merchant promotions enable advertisers to incorporate special deals such as discounts in their product shopping ads. Advertisers begin by creating shopping campaigns, which can be deployed to sell inventory, increase traffic to a website or store, or to generate better quality leads.

Retailers set up their AdWords campaign and supply product data via the merchant center. Google then uses this information to create Shopping Ads that appear on search results pages and around the web. The ads include a product photo, title, price, store name and description, and provide viewers with a strong sense of the item before they click on the ad. This delivers warmer leads than sponsored search results, which are usually just basic text.

The merchant promotion aspect of the ad is added after you create an active product feed. Types of promotions include:

Your special promo specifically targets online shoppers and displays with your shopping ad on Google.com once it has been reviewed and approved. Benefits of using this option include a higher click-through rate, more conversions because shoppers have a timely reason to purchase, and capture of traffic on multiple screens through the display of special offer links on a variety of devices.

What the Big Deal Is on Promotion Extensions

Merchant Promotions as we describe them above have been available for Google’s shopping ads for more than five years. Promotion extensions have also been available for some time, but typically they are from retailers. Including these extensions with text ads means advertisers from other verticals could be able to use them too. It also facilitates changing out just the extension, instead of updating the entire copy of the ad.

The benefit of this is that these extensions add more value to your text ads, because they highlight the special offers and show them to users searching for deals. They’re visible below the ad in the form of a bold label, displaying up to two lines of text. When a user selects the extension, the link takes them directly to the special offer they expect to reach.

Some of the other advantages of using promotion extensions are:

The biggest benefit of promotion extensions is that they are free to add. Merchants only pay for the clicks of users viewing the ad, and the cost of an extension click is the same as that of an ad click. So it doesn’t matter where on the ad your user clicks, the cost remains identical but the visitor can choose from multiple extensions or lines of text that all say different things. Obviously, if your visitor clicks first on one special offer and then on another you’ll pay for two clicks, but still at the same price. If a user clicks on two different extensions in quick succession, however, it constitutes a second click on the same ad—and you only pay for one!

In summary, you pay for the clicks on a single ad but, in effect, you can get 5 different promotion options for the same product for the price. And that is a big deal, especially when it comes from Google.

The search engine is not only the biggest single advertising platform in the digital world, it’s also the primary driver of traffic to websites and e-commerce stores and a key component of your advertising strategy.

Harness the power of AdWords by using the opportunities offered by merchant promotions and extensions to boost your ad spend ROI and make the most of Google’s size and power to generate results for your business.